The Greeks Who Left their Mark in 2018 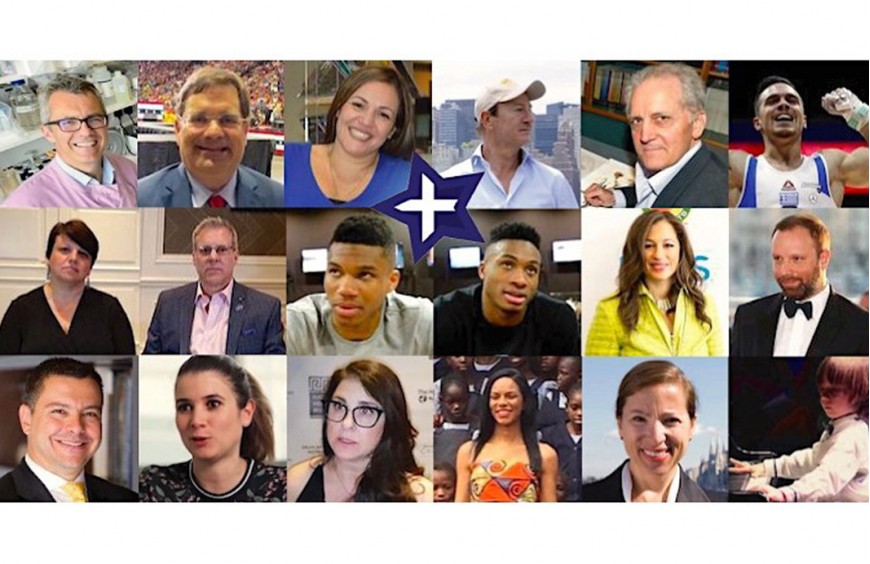 Numerous Greeks and members of the Greek diaspora excelled in 2018, be it in politics, business, sciences, the arts, sports or philanthropy.

Many, perhaps most, of them have risen to great heights in the country to which they emigrated. Often rising quickly to the top in any field which they chose to enter, some individuals rose to special prominence worldwide this past year. Others made a difference in promoting the values of Hellenism and Ethos in Greece and abroad. The list is entirely subjective to the Greek Reporter‘s editorial board and is presented in no particular order.

Giannis and Thanasis Antetokounmpo for Taking a Stance Against Racism

Giannis and Thanasis Antetokounmpo are on the list not just for their basketball skills but because in 2018 they took a brave stance against racism. Thanasis, a basketball powerhouse himself, who is playing for Panathinaikos and the Greek National Team, was the victim of a despicable racist verbal attack in 2018.  Giannis Antetokounmpo, the “Greek Freak”, who is making Greeks all over the world proud with his performances for the Milwaukee Bucks, sent a powerful message against racism. ”There are some times in life when you say enough is enough. I lost my sleep, I was devastated,” Antetokounmpo said, adding that he didn’t speak out to defend himself or his brother, but to raise awareness for other people who suffer racism every day. Thanasis, the older brother of Giannis, is not spoken about as much as his ultra-famous brother. But he was the glue which made the Antetokounmpo family stay together, and he also was the one who worked hard to provide for his younger brother Giannis and the other family members.  Giannis has often said that if it hadn’t been for his brother, he might have not made it to the NBA.

Yorgos Lanthimos, Whose Film ‘The Favourite’ Is Nominated for 5 Golden Globes

Andria Zafirakou won the 2018 Varkey Foundation “Global Teacher Prize” as the world’s best educator. The 38-year-old Greek Cypriot, who works and lives in north London, learned to greet her students in 35 languages every day, since a large percentage of children attending the school have difficulty speaking English.

Democrat Eleni Tsakopoulos-Kounalakis, a first-generation Greek-American, won the race to become the first female to be elected Lieutenant Governor of California. Elected for a maximum of two four-year terms, the lieutenant governor either sits on, or appoints representatives to, many of California’s regulatory bodies. In a recent interview with the Greek Reporter, the businesswoman and former U.S. ambassador said, “The American Dream is what made this country great, and we must keep this pathway open for everyone.”

Maria and Drake Behrakis for Promoting Greek Education and Hellenism

Two of the most influential proponents of Greek education in the United States, Drake G. Behrakis and Maria Exarhopoulos Behrakis, continued their mission throughout 2018 to preserve and promote Hellenism and the Greek language through the National Hellenic Society and the Behrakis Foundation, supporting various organizations worldwide. Drake Behrakis believes that the key NHS project is the “Heritage Greece” program,  through which college-age students go to live in Greece for two and a half weeks. Many students come back with a renewed interest in Greece, showing a willingness to contribute to the country.

After creating four giant companies in New York City’s renovation and construction sector, Greek-American entrepreneur John Kalafatis would already have been counted among the Greeks who left their mark in 2018. However, adding to his previous accomplishments, this mover and shaker also started the massive project of developing a hundred-million-dollar movie studio in the American metropolis in 2018, tapping into the city’s booming movie industry. The studio is expected to create hundred’s of jobs in the Bronx,NY after opening its doors in 2019.

Stefanos Tsitspas made Greek tennis history in October, becoming the first ever Greek citizen to win an Association of Tennis Professionals (ATP) title. The 20-year-old professional player from Athens managed to become one of the most well-known players worldwide in 2018, following amazing performances on some of the world’s most prestigious tennis courts. He is the youngest player ranked in the top 20 by the ATP, and has a career-high ranking of 15th in the world.

Kelly Vlahakis-Hanks, Who Established a Scholarship for Hellenic Causes at UCLA

Kelly Vlahakis-Hanks, a leading Greek-American businesswoman, decided in June to lend her support to UCLA’s Stavros Niarchos Foundation Center for the Study of Hellenic Culture by establishing a new undergraduate scholarship for students. The scholarships will be awarded to those who demonstrate leadership in Hellenic causes, environmental issues, or community empowerment. The President and CEO of Earth Friendly Products, also showed her strong connection to Greece by visiting the fire-struck area of East Attica and Mati during the summer of 2018, helping the local people, donating cleaning products and supporting the victims.

George Vassiliou for His Pioneering Research in Battling Leukemia

Dr. George Vassiliou and his team at the U.K.’s Wellcome Sanger Institute have discovered that a component in eye drops has also shown promise for the treatment of leukemia. They found that the compound, which targets an essential cancer gene, could kill leukemia cells without harming non-leukemic blood cells. “This shows promise as a potential approach for treating this aggressive leukemia in humans,” Dr. Vassiliou said.

Lefteris Petrounias, “Lord of the Rings”, Makes it Three Golds in a Row

Jimmy Athanasopoulos and the Libra Group for their Social Responsibility Program

Jimmy Athanasopoulos, Head of Social Responsibility for the Libra Group, provides strategic oversight of the group’s global responsibility and education programs. Through 10 different programs and initiatives, which are broadly linked to the themes of community support and assisting people who have been denied or have limited opportunity, the Group seeks to turn family values into guiding business principles.

One core value is a strong sense of respect and trust in the individual. Another is a sense of community – recognizing that together we can be more. Over the years, Athanasopoulos has helped create and guide more than a dozen of charitable projects funded by Libra, among them “The Home Project”, a non-profit which offers a home to unaccompanied minor refugees, and the “Envolve Award”, an entrepreneurship award responsible for the funding of countless startups.

George Paxinos, Who Discovered an Unknown Area in the Human Brain

Greek-Australian neuroscientist George Paxinos discovered a new, previously completely unknown area in the human brain, calling it “Endorestiform Nucleus”. The Ithaca-born professor found the new region near the point where the brain connects to the spinal cord, in an area which is responsible for integrating and combining sensory and kinetic information to correct posture and balance, and coordinating small, detailed movements.

Noella Coursaris Musunka, born to a Greek Cypriot father and a Congolese mother in the Democratic Republic of Congo (DRC), devotes her life to help children in her homeland. The former model founded a non-profit organization, the Malaika Foundation, which aims to empower Congolese girls and their communities by promoting and encouraging educational and health awareness programs.

Despoina Petousi, a Greek software engineer working in Germany, won the prestigious “Bertha Benz Prize” for 2018. The prize is aimed specifically at young female doctorate-level engineers who have created ideas or products of great value to society as a result of their dissertation. Petousi, from the Technical University of Berlin, says her research work focuses on devices which will make it possible for everyone to have high-speed internet.

Gus Bilirakis, Elected Seven Times to the House of Representatives

Steven Kons and Giovana Christofi-Simpson, the Mayor and Deputy Mayor of a Tasmanian Town

The town of Burnie, Tasmania — population 20,000 — can boast that it is the only city outside Greece and Cyprus which is run by a Greek mayor and a Cypriot deputy. Following the October council elections, Steven Kons was elected mayor and Giovana Christofi-Simpson deputy mayor. It’s an amazing feat for the two politicians, since the town “has only a handful of Greeks, less than ten families in total,” says Kons.

Laura Calamos Nasir, for Her Initiative to Digitize Greek American History at the National Hellenic Museum

Dr. Laura Calamos Nasir, the president of the Hellenic Museum in Chicago, distinguished herself in 2018 for her efforts to create an archive of oral history and digitize documents relating to Greek-American history. Speaking recently to the Greek Reporter, she said that the collections of the Museum reflected some of the “hard, deep” stories of Greek immigrants’ lives in the U.S.  “We are the largest collection in the world for Greek-American stories,” she stated. If not digitised, the oral histories of mant 1st, 2nd and 3rd generation Greek Americans are in danger of being lost forever, in a sense Greek American history might be lost with time.

Stelios Kerasidis, of Athens, Greece, managed to accomplish one of many landmarks in his young life and career with his performance at Carnegie Hall in October. The six-year-old musician played Chopin’s Valse la minor and became the youngest Greek musician of all time to play at Carnegie Hall. He was also awarded first prize at the Awards.

Kyriakos Anastasiadis, who voluntarily performed more than thirty cardiac surgeries at a Mauritius hospital in the space of two weeks, was honored by the Aristotle University of Thessaloniki for his charitable contribution. Anastasiadis, professor at the University, chose to help the people of the Indian Ocean nation, because according to him, the country suffers from high rates of heart disease caused by diabetes.

The Centaurus Racing Team from the Department of Mechanical Engineering of  Volos, at the University of Thessaly,  won top prize for their innovative Formula racing car at an international competition in Britain. The team won top acclaim in the category of design for their prototype called Amphion at the IMechE Formula Student competition which took place at Silverstone, the home of British motor racing.

Christos Tsirogiannis, the “Thorn in the Side of Auction Houses”

Christos Tsirogiannis, a Greek forensic archaeologist based in the U.K., has discovered and reported numerous cases of looted ancient artifacts in Greece and abroad. His sleuthing has led to a handful of items being withdrawn from sale at auctions due to be held in Britain in recent years, with yet more removed from sales in New York. He told the Greek Reporter recently that “I will continue to (recover) everything relating to Greece I discover through my research, seeking no financial reward, simply because I am Greek and I love my country.”